Here’s a list of some of the choir’s past performances, starting with the most recent.

24th June:  SUMMER SPECTACULAR! Songs from the shows including Phantom of the Opera and Mamma Mia with local schools, Old Hall, East Bergholt

27th June:  Rutter A Sprig of Thyme; An arrangement of songs from Disney’s The Lion King, with local schools, Old Hall, East Bergholt

19th to 22nd May:  (Visit to Frankenberg) Schubert Mass in G 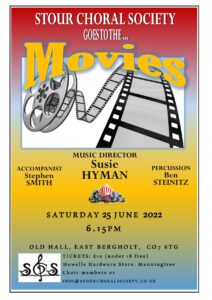